One Of The Most Charming Towns In Tenerife

Located between the cone of the mountain Chayofita and the greater mountain Guaza is one the most charming towns in Tenerife. With a population of 21,235 (2017), Los Cristianos offers a wealth of accommodation to suit all budgets, including hotels and self-catering apartments.

Lots of bars and restaurants of varying styles, from ‘tapas’ to high quality local and international cuisine are located in Los Cristianos. Eating out is inexpensive; so many visitors opt for half-board or self-catering accommodation.

Cruises and ferry services are going daily to the neighbouring islands of La Gomera, El Hierro and La Palma.

Los Cristianos is also a major commercial center for the south of Tenerife, with a number of small shopping malls, as well as major national-chain supermarkets.

Los Cristianos is connected via the TF1 Motorway to the island’s capital city Santa Cruz de Tenerife, and to the Tenerife South Airport. (Direct bus to S.C. is bus 110. 111 operates in a day time and 711 at night. Direct bus going straight to airport, is bus number 40). The town has its own bus terminal with regular services to other parts of the island. You can learn more here about public transport.

The town itself is best explored by foot, as it has a number of wheelchair friendly pedestrian walkways and a long beachfront promenade. Taxis are readily available within the town.

In December 2008 the Los Cristianos promenade, which was originally constructed back in the seventies, was given a facelift. 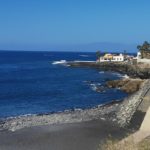